I know, I said I wasn’t going to blog daily after the chemo/radiation treatments stopped, but I find it somewhat theraputic.  I haven’t put as much medically into this as I had perhaps hoped, but a lot of it I am learning as I go.

Today seemed to go by extremely fast as I worked in the morning as usual, but took the rest of the day off (for the most part) as I had to go & get my mother from the hospital as she was discharged.  As usual, she was supposed to be discharged around Noon, but they don’t have their act together.  She had been asking them since 8:30 a.m. to make sure she was OUT by Noon as I was picking her up, but they didn’t have her ready till 1 p.m.  I didn’t want to wait int he car in the parking lot because I KNOW how doctors/hospitals are…I went into her room around 12:30 p.m. to wait with her & just be with Mom.

We chatted for a bit as I gave her some interesting news & then we walked out together around 1 p.m.  We decided that she was up for lunch, so we went to SaltGrass again for lunch.  I had the potato soup & fried mushrooms again (good!) & she had the steak sandwich that you dip in Aus Jus sauce (can’t think of what it’s called, sorry).

After an hour + lunch together, we headed to take her home (my folks are staying with my brother & his wife).  I then came home & worked for another hour or two until Dawnette came home.

From there, I made dinner for Danwnette & I & then worked on my new server build (for you fellow “geeks” out there, I am building a server with an 8-core AMD processor, 32GB of RAM, 128GB SSD hard drive along with a 2TB data drive (7200RPM), etc.  It’s going to be an ESXi v5 VM host server that I will then P2V my existing Windows SBS 2011 server here at the house to free up that system to replace mine, which is 5+ years old.  VERY excited!  LOVE to learn new things, and VMWare is something (fairly) new to me.

Slept fairly well last night…didn’t really wake up until about 5 a.m., but then had a hard time getting back to sleep.  Dawnette’s alarm went off at 5:30 a.m., so there wasn’t much point.  I just kinda laid in bed & rested until having to get up by 7 a.m. to get ready for treatments.  Took a shower (…hopefully the LAST one with the chemo pack!) & then headed out.

Had my usual radiation treatment (only one more of those to go as well!) & then checked into the chemo side of Texas Oncology.  Went & got my blood work done as usual, then back over to the chemo side to see if I get my picc-line out.  Sure enough, they had me scheduled to get it out. 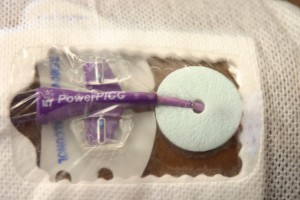 GOTTA be honest, it was GROSS!  I had only recently found out that the picc-line doesn’t just go into my arm, but goes all the way to my heart (thanks Chuck!).  Based on that, I “assumed” that the purple part of the picc-line that went into my arm was just a casing for the part that went all the way into my heart.  Nope, you know what it means to “assume”, right?  As the nurse started gently pulling it out, that sucker, purple casing & all went all the way.  I could FEEL it as she removed it…it was gross…and I don’t get grossed-out easily.  She kept pulling & pulling & pulling…well, you get the idea.  I would say it was roughly 18″ if not longer.  But it came out smooth (should have gotten a picture or kept the dang thing to be honest)…no issues.  The spot where the picc-line went into my arm didn’t even bleed.  The nurse didn’t do anything except put a small piece of gauze & tape, and that was it.  I was done.

The 5 1/2 weeks went fast in hindsight, but it didn’t feel that way as I was going through it!  I then went back out to the waiting room to wait on my appointment at 9 a.m. for Dr. Stone.  When I was called back, they did the weigh-in as usual (down to 259lbs!) & then I met with Dr. Stone.  He thought overall I was doing well and then began to go over what to expect going forward.

I’ll have 4-6 weeks off & then have the surgery.  I actually meet with Dr. Burleson in 2 weeks, on April 19th to get an update & schedule the surgery.  I’ll be in the hospital the first week of the surgery, then home on bed rest for the 2nd week.  Weeks 3-6 will continue the recovery.  So I guess we’ll find out more in 2 weeks.

Afterwards, I came home & rested/iced down for about 30 minutes before heading back out to go pick up my mother.  I was taking her to get her admitted to the hospital due to complications with her fluid build-up related to her cancer (she’s stage 4 breast cancer).

After I picked her up, she wanted to run an errand at Target in Lewisville.  She picked up some “contraband” for her stay in the hospital.  We then went to Salt Grass Steakhouse for lunch.  They have an AWESOME potato soup, which we both got & then we split some fried mushrooms (also pretty good!).

We relaxed over lunch & then I took her to the hospital in Lewisville to get admitted.  That took a bit over an hour, and around 2:30 p.m. I had a bowel movement that just through me for a loop for some reason…very painful.  I had intended on staying with Mom throughout the afternoon, but I ended up telling her that I needed to go home.  I was very lethargic at that point & felt like I was going to pass out.  What I REALLY wanted to do was lay down & go to sleep, but I had to get home…and quickly.

I drove home from Lewisville to quickly as quickly (and safely) as I could…felt like I was gonna pass out the entire way, so it was a bit unnerving!  Made it home a bit after 3 p.m. & had another BM & then got an ice pack & went & laid down on the couch & rested/half fell asleep.

Dawnette got home around 4 p.m. & we talked for a bit while I continued to lie on the couch and rest / ice down.  We watched a movie together & she made some pizza & then at 6:30 p.m. I felt somewhat rested enough to try bowling with the guys.  It was our first week of the Spring League & I was REALLY looking forward to hanging out with Chris Bardee, William Giger & James Apple.  James couldn’t make it as he had to work, but we had a good time none the less.  We won 2 out of our 3 games as well as the overall, so we got 3 out of 4 points.  I was exhausted by the end of the 2nd game, but I pushed through & finished the 3rd game…though my score suffered as a result.  It was good to see our “regular” employees at the alley…Kayla, Brittney & xxx.

I came home & got an ice pack & immediately went upstairs to rest.  I was COMPLETELY exhausted.